0
481 Views
Warning: json_decode() expects parameter 1 to be string, object given in /homepages/43/d806122517/htdocs/clickandbuilds/Rossonline/wp-content/plugins/posts-social-shares-count/classes/share.count.php on line 66
0
Shares 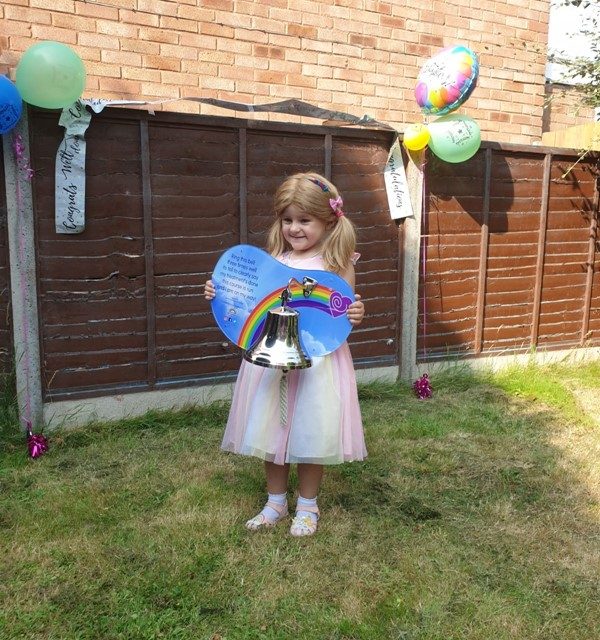 Oliwia was diagnosed with cancer in June last year and has undergone intense oncology treatment between Birmingham Women’s and Children’s Hospital and Wye Valley NHS Trust.

She finished her treatment in July but was unable to ring the end of treatment bell at Hereford County Hospital at the time due to restrictions imposed because of the coronavirus pandemic.

Now, a month later, Wye Valley NHS Trust arranged for Oliwia to ring the bell in her Nan’s garden surrounded by her close family and some of the staff who looked after her.

A spokesperson said: “Oliwia has been super brave throughout the whole of this time and staff were delighted to be able to arrange the bell-ringing ceremony away from the hospital for her.”

The day was made extra special thanks to cupcakes – Caticorns, unicorns and rainbows being particularly popular – by Laura Jordan.

The Trust would like to thank Project Linus, which donated a quilted blanket, and also to the End of Treatment Bell Company which donated the bell to the Trust. This will be used by future patients.

Pictured: Brave five year old Oliwia with the End of Treatment bell she rang in her Nan’s garden.

Have your say on HWFRS Community Risk Management Plan