0
678 Views
Warning: json_decode() expects parameter 1 to be string, object given in /homepages/43/d806122517/htdocs/clickandbuilds/Rossonline/wp-content/plugins/posts-social-shares-count/classes/share.count.php on line 66
0
Shares 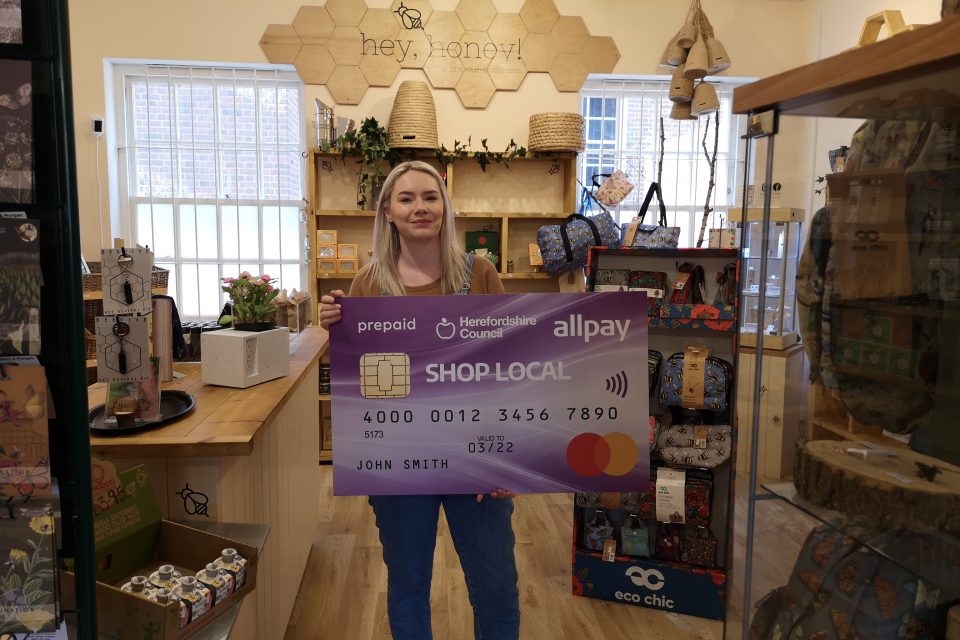 Householders across Herefordshire are urged to activate and use their £15 Shop Local cards — before the chance to spend the cash runs out.

Nearly 60,000 shop local prepaid cards have been sent out to households across the county as part of Herefordshire Council’s scheme to help local retailers recover from the pandemic. Herefordshire Council are delighted with the success of the scheme so far, however thousands of cards have yet to be activated and more than half a million pounds remains to be spent.

Residents who haven’t yet activated their card are urged to follow the simple activation steps and spend their £15 before the cards expire at the end of March.

New figures show 58,893 cards have been issued across the county and that so far just over 40,000 have been activated. In total, the cards have been used by householders to spend more than £315,000.

More than £500,000 remains unspent on the cards – and the council is reminding householders to move quickly to beat the 31 March 2022 deadline.

Councillor Ellie Chowns, Cabinet member for environment and economy, said they were delighted with the numbers of people who had applied for their Shop Local card before applications closed.

“The figures we achieved for applications are tremendous, but time is starting to run out for people to both activate their cards and spend the money on them.

“The cards can be activated using the instructions on the letter it came with, and help is available for anyone who has any difficulty by emailing shoplocal@herefordshire.gov.uk or calling 01432 260 000.

“This money will not be available to spend after 31 March 2022 so we would urge anyone who has yet to activate their card — or who still has money left on an active card — to take advantage of the scheme now.”

The Shop Local scheme is designed to help local producers and retailers and is part of a wider £6million council programme, funded through the government’s covid recovery fund, to boost the local economy, including free weekend bus travel, grants for small businesses and a phone app to reward local shopping.

Over 1,500 individual businesses in Herefordshire have accepted card payments.

Laura Hall, managing director of Hey Honey in Church Street, said the Shop Local card had been a lifeline for the specialist store over Christmas.

The shop, which sells all things bee-related, had rung up 68 separate sales using the Shop Local card worth a total of £881.

“I cannot stress just how hard Christmas has been and what a huge difference this initiative has made,” said Laura.

“It’s been really heart-warming to see people coming in with their card and saying that they knew exactly where they were going to use it as soon as it arrived. They have been incredibly loyal and it really means the world to us.

“The scheme really has made a massive difference. We’ve seen nearly £1,000 in sales and that has been a significant part of our Christmas income.”

Councillor Chowns added: “We have heard many wonderful stories from some of our independent retailers and producers such as Laura about how Shop Local has helped bring people back out to start shopping. There are a number of studies that show how money spent locally tends to stay local, so this scheme is not only benefitting the retailers and producers in question, but the whole of the Herefordshire economy.”

The cards can be used at any business in the county that accepts Mastercard payments but cannot be used for some uses including off-licences, as well as for betting and gambling (including lottery tickets and casinos), dating and escort services, massage parlours, automated fuel pumps, cable, satellite or other paid TV subscription services and telecommunications services.

Help is available for anyone having difficulty activating their card – email shoplocal@herefordshire.gov.uk or telephone 01432 260 000.

Herefordshire Council remind residents Covid has not gone away