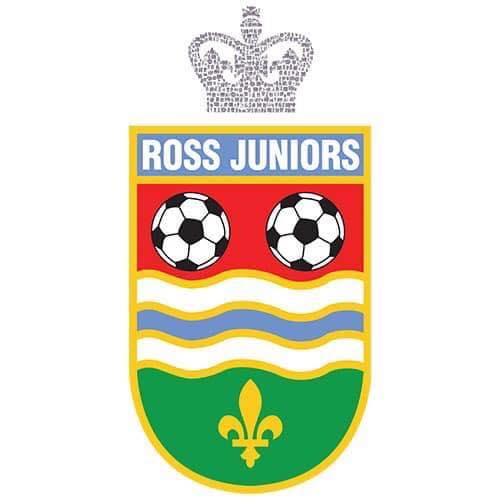 A roundup of Ross Juniors matches that took place over the weekend of 17th and 18th April. 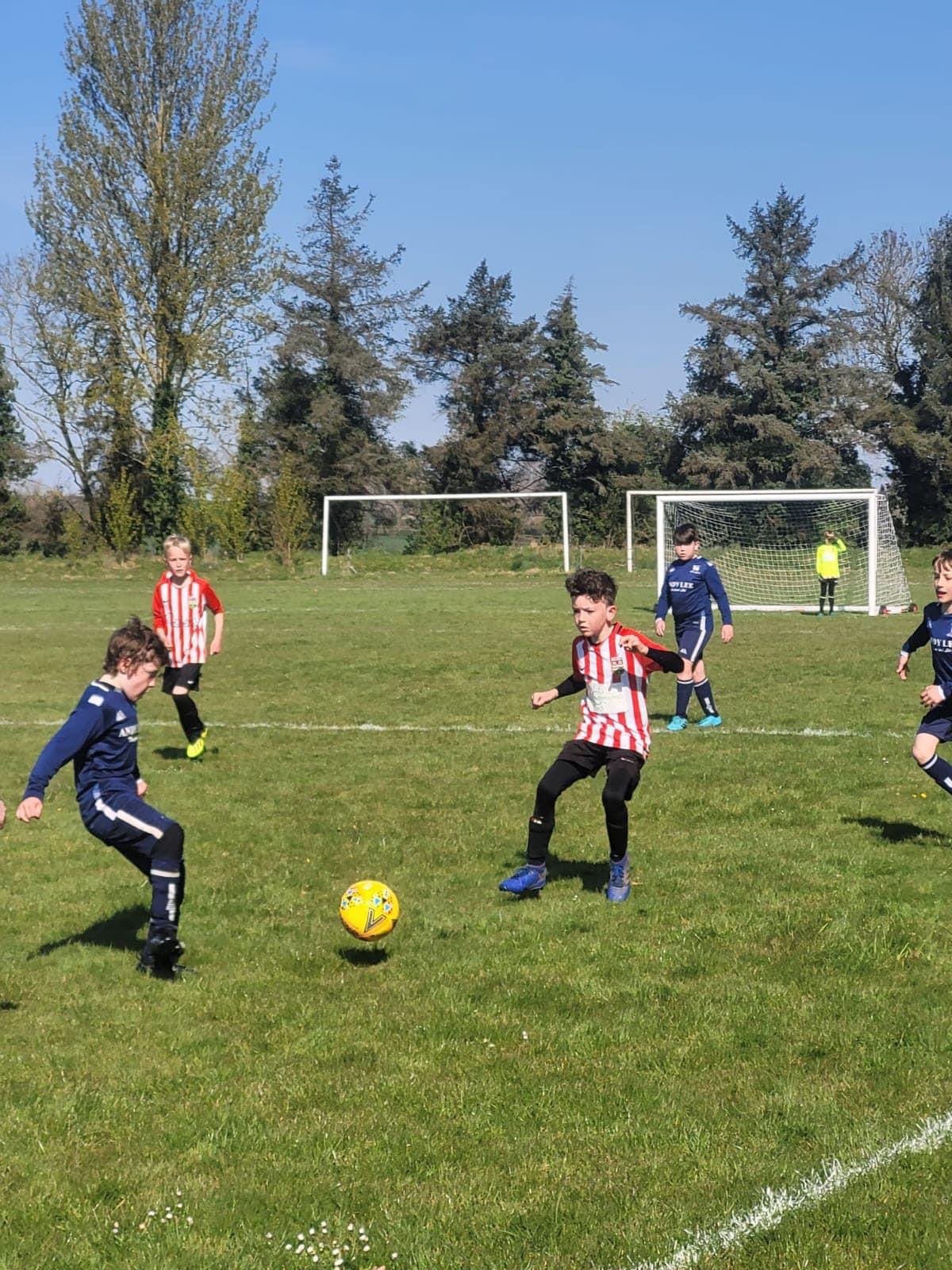 Ross Juniors U9s travelled to Toros on Saturday for the second round in the Hillmans Florist Cup. With only 1 sub the boys knew they would have to work hard and from start to finish the game was fast paced and exciting (albeit a little nerve wracking for the parents!) with some excellent football being played by both teams.

The score board was 0-0 at half time and Toros were quick to score in the second half. Max, David and William worked tirelessly in defence and Kane made some great saves in his debut in goal.

Ross was getting closer and closer and finally got the goal they deserved following a corner from William and Nicki coolly tapped it in. Excellent passing between the midfield Nicki and Lucas led to many goal opportunities with Ellis hitting to cross bar and Louis quickly going for the rebound header but sadly it didn’t happen for Ross. Toros got the winning goal with just a couple of minutes to go. 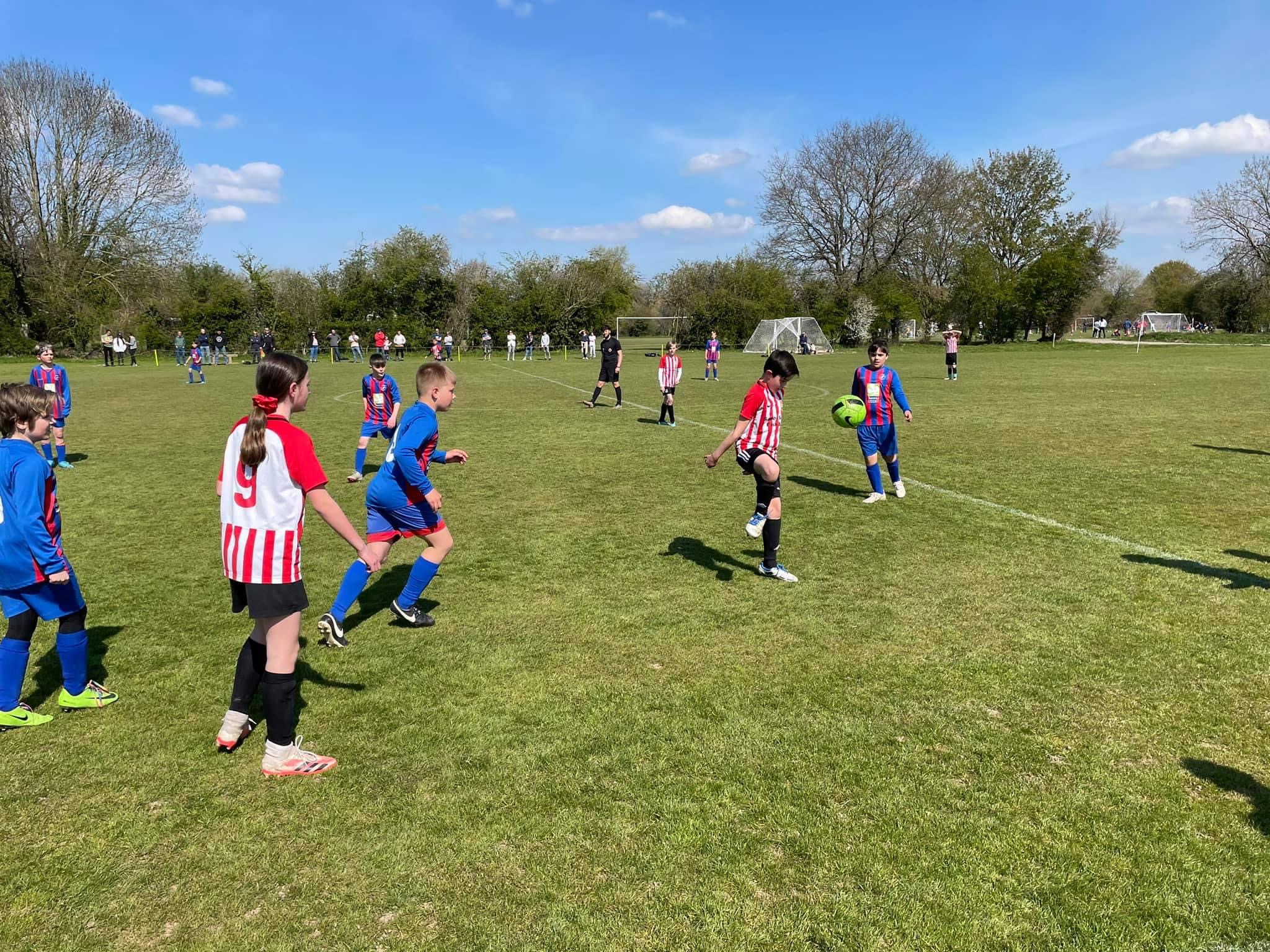 It was a fantastic result in the cup for the U11 Juniors on Saturday morning with a 2-1 win an even contests versus a good Ledbury Athletic side.

0-0 at half time but goals from Noah S and Tristan saw Ross run out 2-1 winners and progress to the next round. Well done Juniors, it was an awesome performance from the boys and girls in the team. 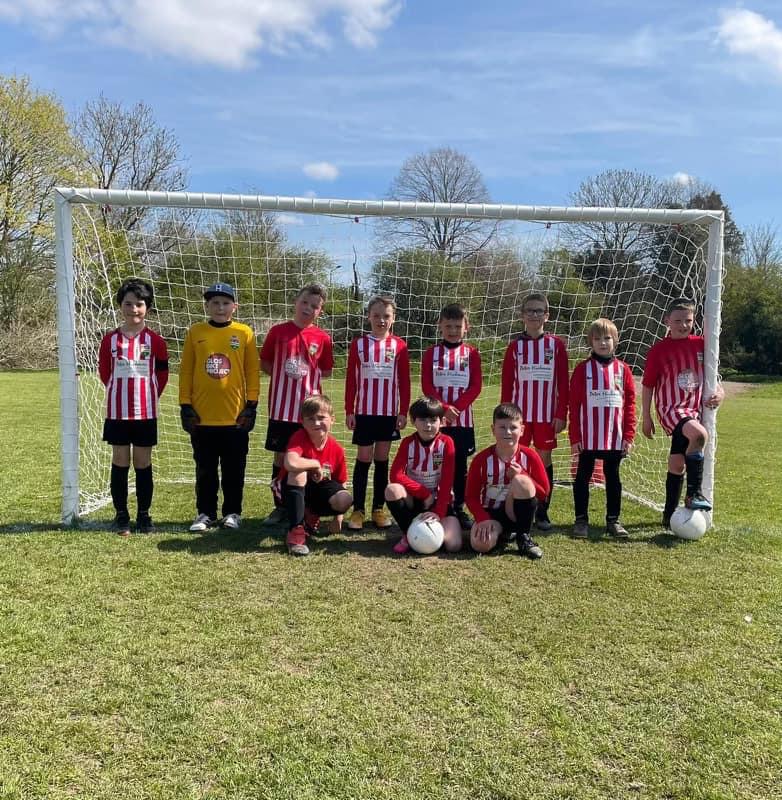 The U9 Colts, coached by Stefan and Chris, had the toughest of cup games playing against Pegasus Colts at home on Saturday morning.

The boys did themselves proud, and never gave up, working hard and improving as game went on. Aidan scored for Ross from a quick throw and the whole team did brilliantly. 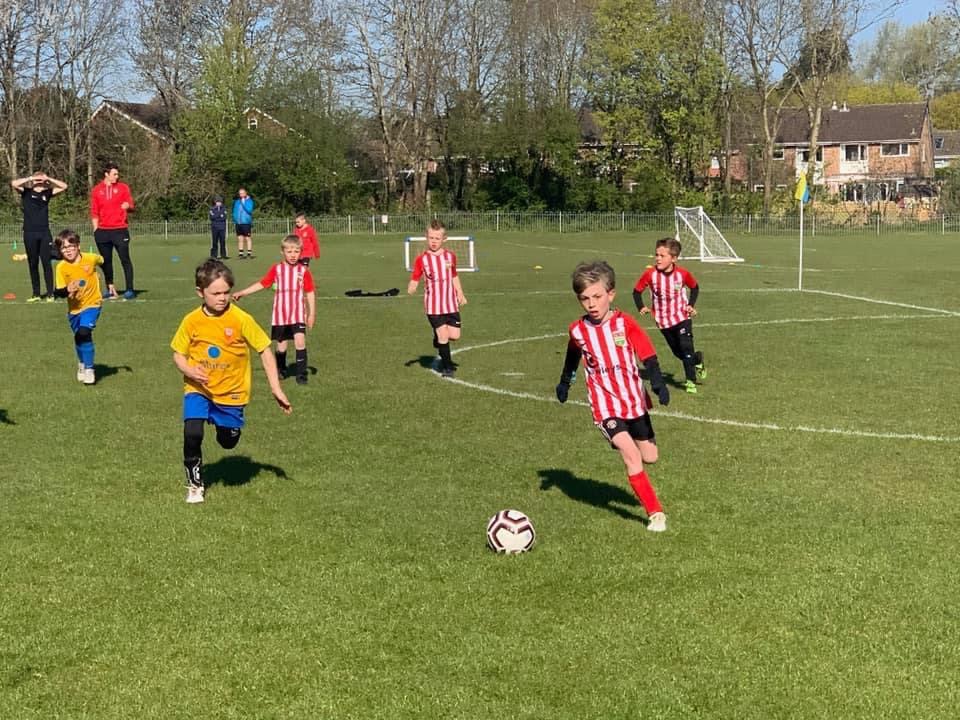 The U8 colts travelled to play FC Phoenix in the quarter final of the cup on Saturday morning.

The game was end to end with high intensity from both teams. The boys didn’t look out of place at all today even with being a year younger, they battled for every ball and never gave up.

Jay, Jasper and William put a great shift in defence when called upon and Alfie and Harry also never gave up when they were on the pitch and really helped the team.

Up top James managed to bag himself a hat-trick and Rui also managed to find the back of the net.

Vlad started between this sticks this week and made some amazing saves. Vlad managed to somehow keep out a free kick with every spectator giving him a round of applause.

When Sam was called upon to replace Vlad he also made some good saves.

Man of the Match this week went to Vlad for such a solid display in goal.

Good luck to FC Phoenix in the next round. 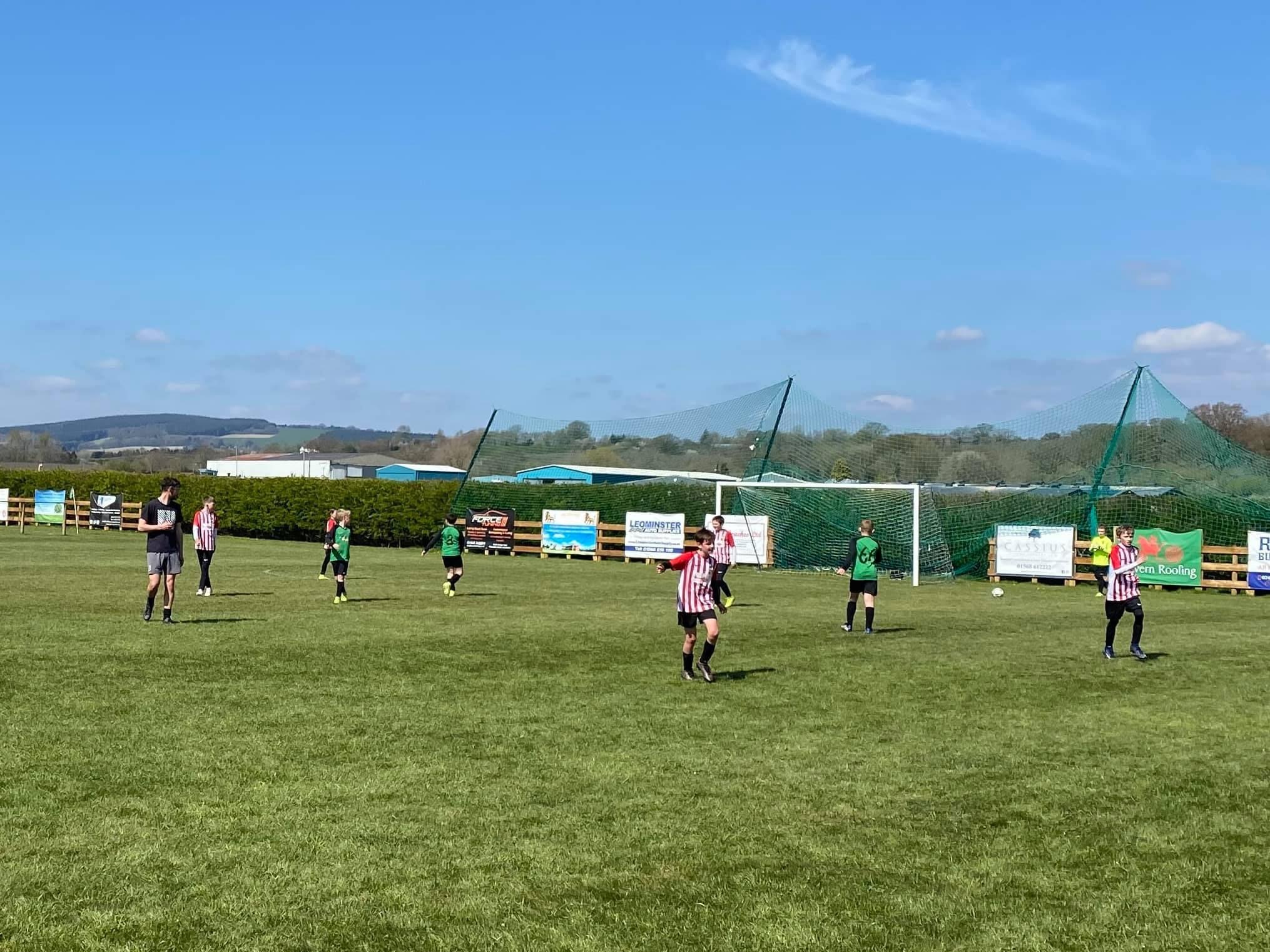 Ross Juniors U11 Colts made the long trip to Shobdon on Saturday to face a very good opponent in the cup.

Shobdon started the quicker of the two sides and their efforts resulted in reward early on with a great finish from the edge of the area to take the lead. Ross responded with some resilient defending from Ollie M, Josh, Callum, Reagan, Oli W and Adrian, with Jack F marshalling the goal line brilliantly. However, Ross were struggling to get out of their own half and just before half time, Shobdon doubled their lead with Jack F very unfortunate not to see the shot come in until it was too late.

Half time came and Ross made changes in an attempt to change the game – this quickly payed off. Firstly a goal from Jack B capitalising on a mix up from a corner and then two minutes later, Gracjan equalising from a fantastic passage of passing play. With 20 minutes to go, it was all to play for.

Oliver C and Billy continued to work tirelessly in the channels forcing Shobdon back and soon had a big shout for a penalty which the referee waved away. But as the game went on, Ross began to tire and Shobdon capitalised with two quick goals, both of which were very composed finishes. The final few minutes saw Ross give their all but today was not to be their day.

On the day, the best team won and Shobdon showed their quality throughout with some technically brilliant play. Ross will be left frustrated having worked hard to get back into the game though should take pride for the efforts they put in. 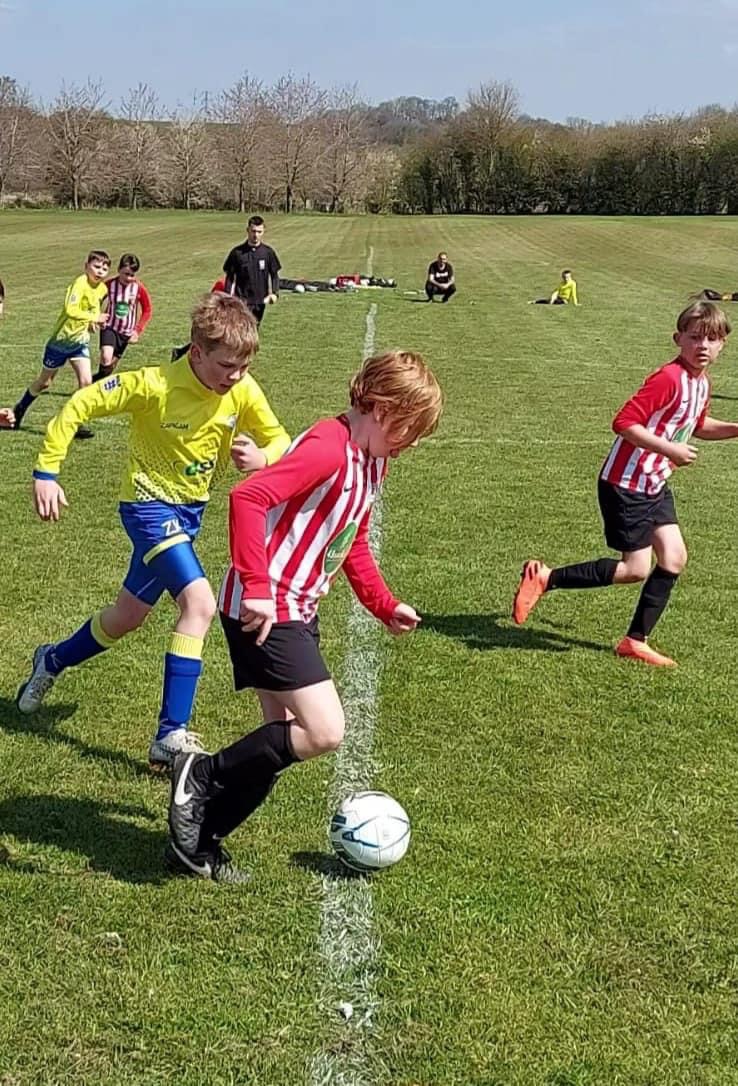 Ross Juniors U10s put in a great team performance away at Tenbury Utd in the cup on Saturday morning.

Jasper set them on their way with a great finish, and Tyron soon doubled their lead with an equally fine goal from Morgan’s long range pass. Euan and Riley added further goals in the first half. Tenbury went close to scoring but Owen made a great save in the Ross goal.

Jasper opened the scoring in the 2nd half before Riley grabbed himself 3 quick goals. Timmy and Tyron defended brilliantly with support from Euan playing as a sweeper-keeper as Ross kept up the pressure on their hosts. Leighton was unlucky to see his free kick strike the crossbar before Annabelle and Ben combined for Zak to score a well deserved goal.

Ross are away to Ledbury Athletic on Saturday in the Quarter Final. 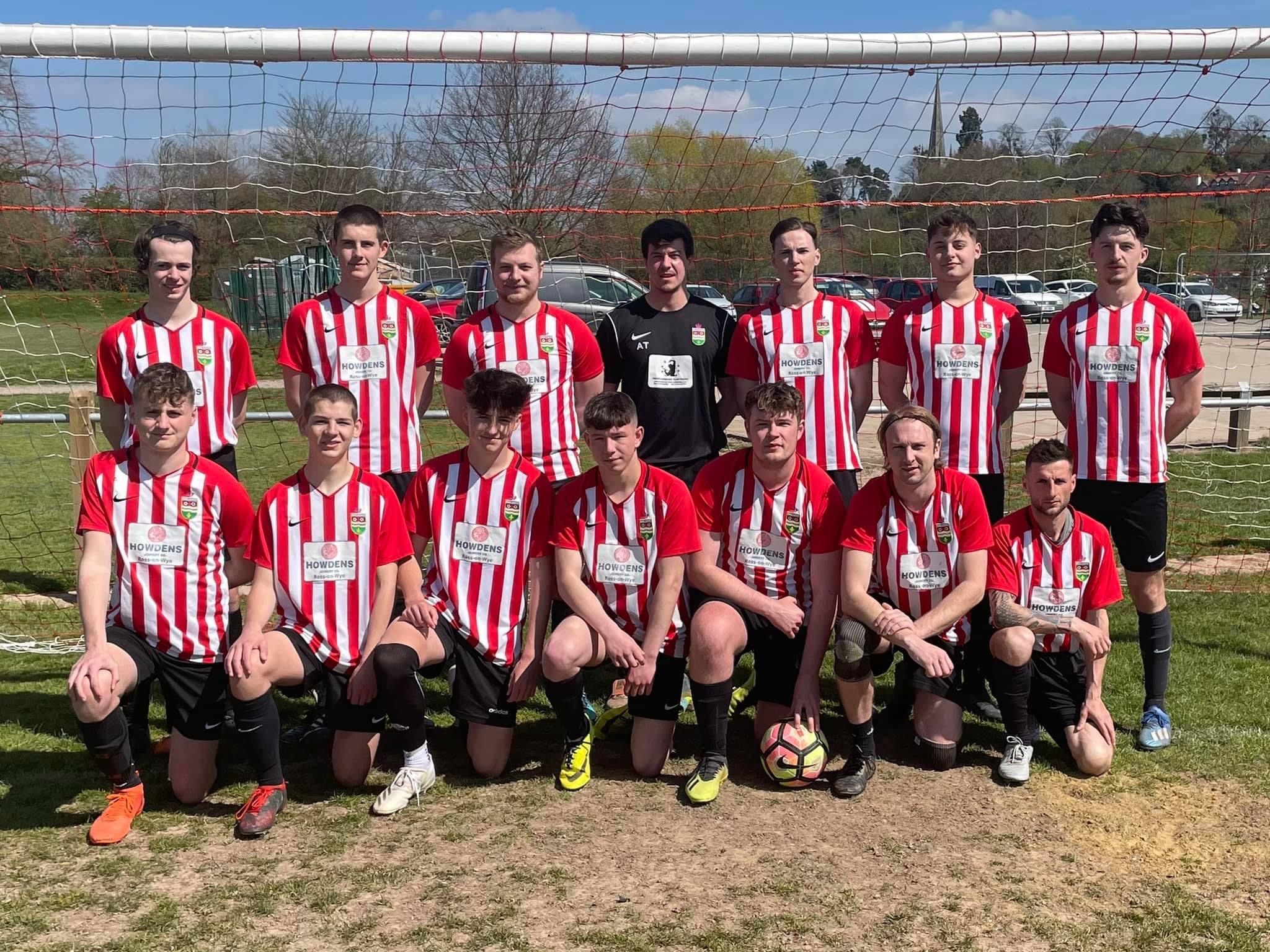 Lads Club took control of the game with 2 quick goals in the 22nd and 25th minute. Ross thought back however with a well struck shot from Luke Firkin just before half time.

The second half saw a game of few chances and Lads Club held out for a 2-1 victory, but the reserves can be proud of their performance. 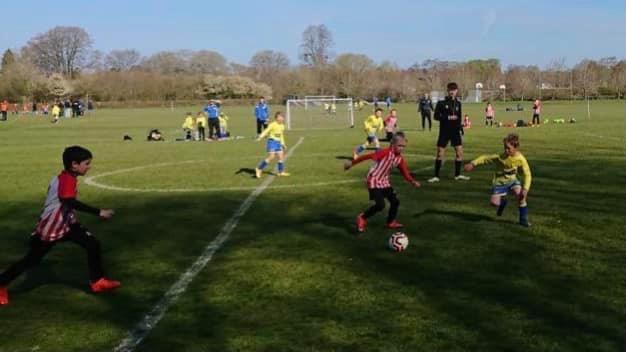 The under 8s travelled to Tenbury Wells early doors on Saturday morning to play their first ever cup game against an unbeaten Tenbury United.

This turned out to be a cracking contest between the sides. Ross were straight into the flow and with great attacking play the first goal came from Harry and the second from Luke. This game was end to end and great play from both sides and Tenbury were back in it with a couple of goals in the second half.

Both sides showed true grit and determination in this cup tie and Tenbury just edged it the final minutes but what a game. This was a fantastic standard for under 8s football and good luck to Tenbury in the next round. 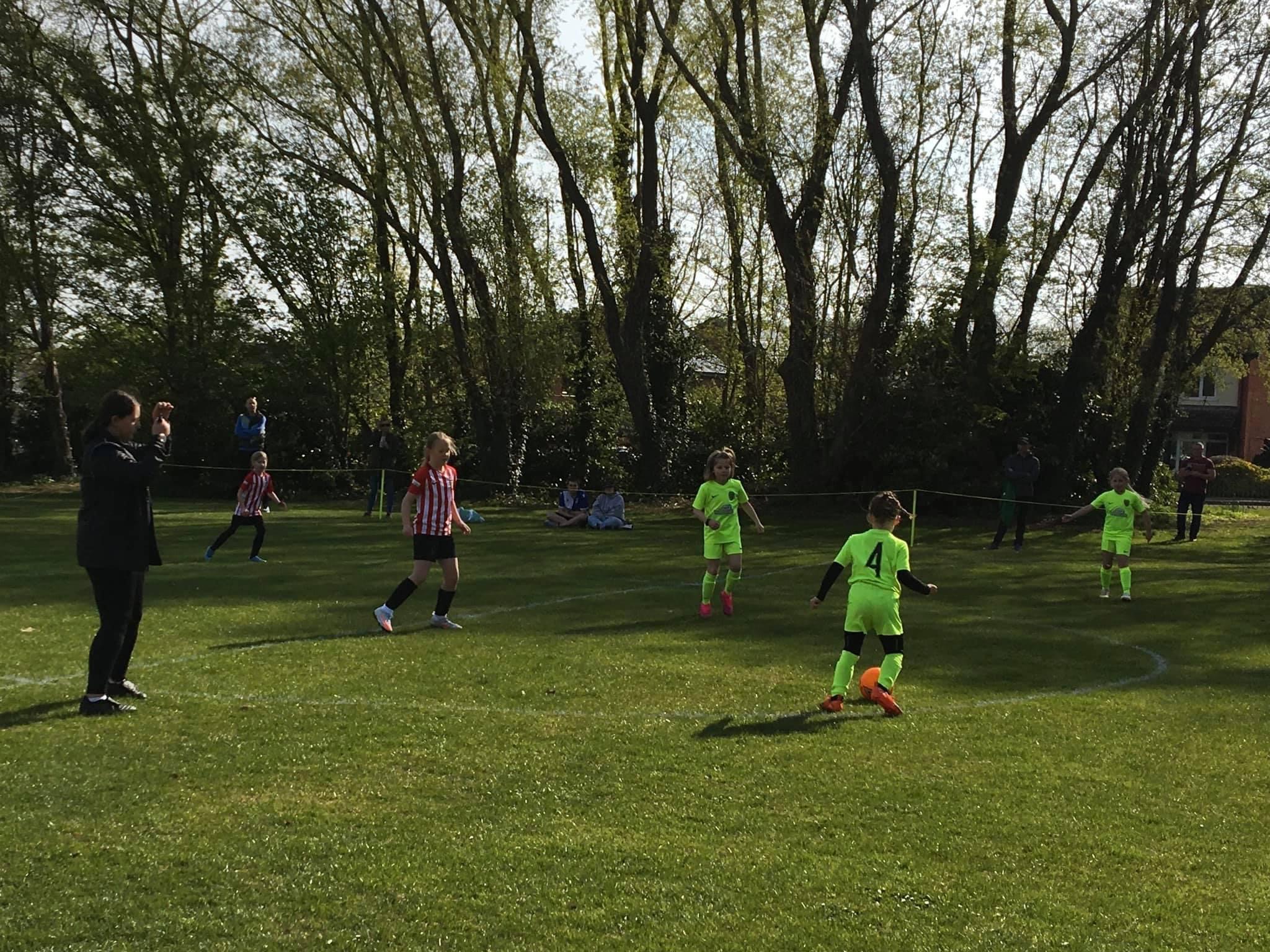 On Sunday the U8 girls played Tupsley Wildcats away. The girls started well, but with only one sub and then a player injured, meant the girls had an uphill battle.

Bronte and Isla scored a great goal each and there were also some strong performances from Amelie, Erin and Delilah. Lucy made some wonderful saves in goal. Well done to the girls battling away in difficult circumstances against a very strong team 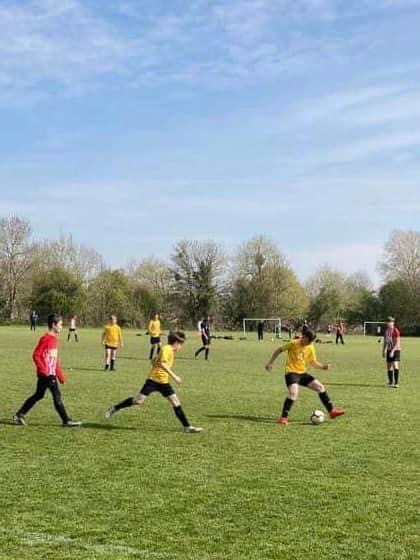 Ross Juniors under 13s boys faced Leominster on Sunday at home in the 2nd round of the cup.

Ross largely dominated the game and took a deserved first half lead when Alfie ran through and smashed home following a great pass from Alex.

The 2nd half was much the same with Leominster battling hard but Ross having all the possession. This finally paid off as Todd finished of a decent move and Niall then added a third, quickly reacting as Leominster failed to clear.

The boys go into the quarterfinals with a final score of 3-0. 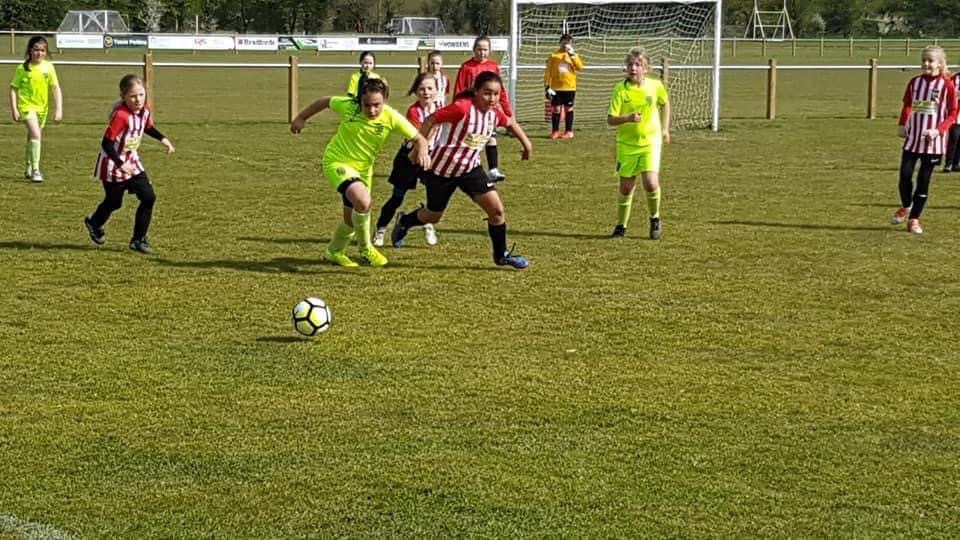 Ross Girls U10 colts welcomed Tupsley Pumas Sunday morning in the Semi Final of the cup.

Ross had a disappointing start conceding a couple of goals within a few minutes. Tupsley took advantage and the defence of Fiona and Lacey did great to hold off for as long as they could. Izzie and Mercedes were having great games on the wings trying to get Ross into the Tupsley half.

Half Time and Ross were 6 down and Louise and Spud had some work to do!

The 2nd half Ross came out a totally different team taking the game to the Pumas from the start. Mia making driving runs through mid field backed up by Abi, Freya and Maggie.

Ross got the goal they deserved when a lovely piece of skill and finish by Mia. Ross were on the charge and they sensed a come back! Izzie kept battling hard to win the ball back and keep Ross on the attack. The 2nd goal came from a class corner from Lacey which found the net from an acute angle. Josie and Fiona and Thea in goal seemed to have the Puma attack under control. Another goal for Mia and it was game on. Ross conceded a late goal which put the game to bed but the way the girls didn’t drop their heads and came out and won the 2nd half was amazing to see. 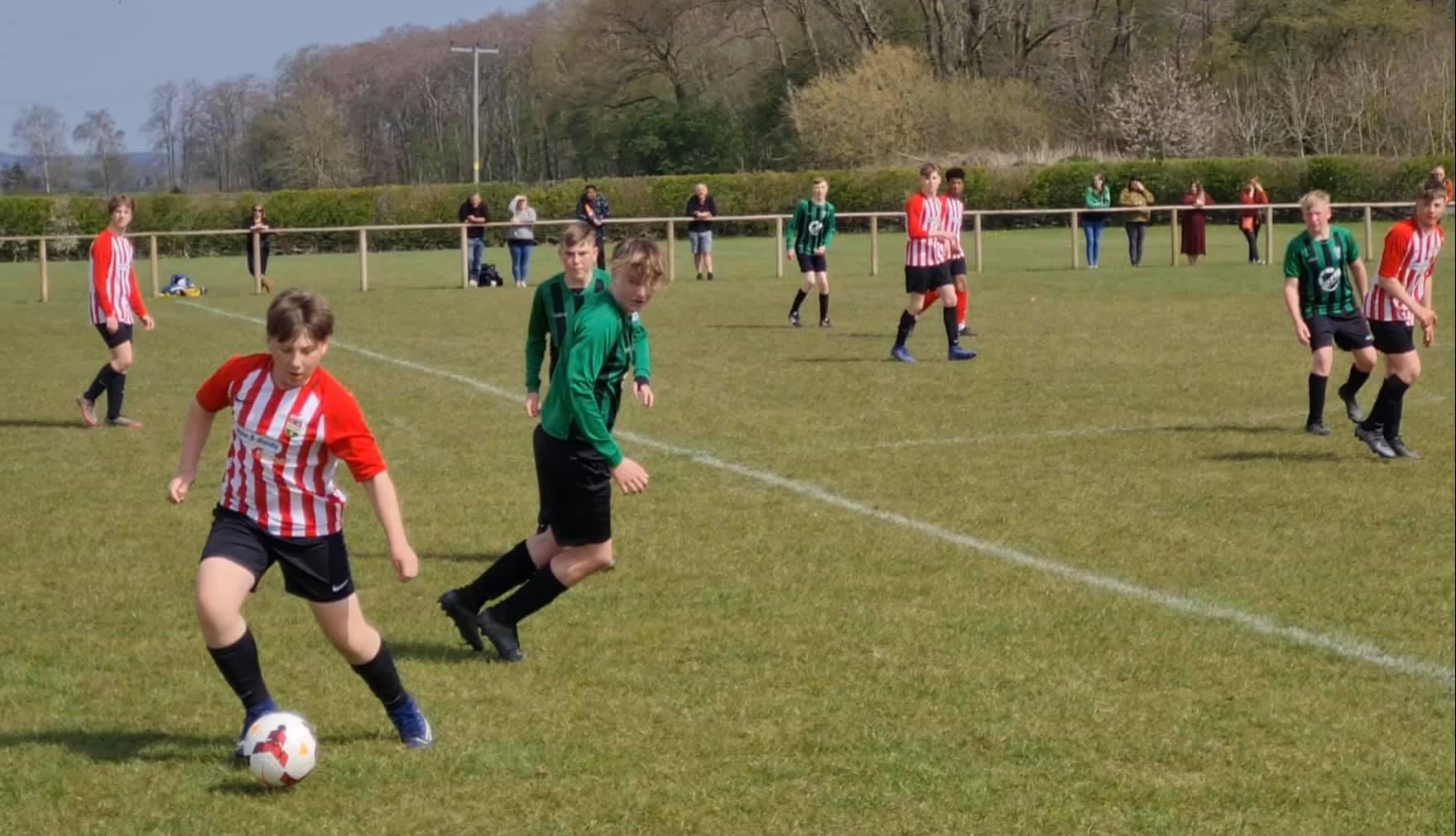 Ross Juniors under 15s travelled away to Shobdon on Sunday afternoon for the Quarter finals of the Bill Bowkett Cup.

Ross started strong winning a penalty in the first 10 mins which Jake calmly put away to give Ross the lead. Ross continued to get the better of Shobdon playing some great attacking football creating loads of chances. Tye scored a hatrick but could have had double that today he played fanatic and had the better of the shobdon defence every time.

Owen timed his run just right and got on the end of Tyes cross to score a well deserved goal. Harry scored a great free kick that the keeper just couldn’t get to.

Fin played brilliant with some great cross field passes to put the strikers in behind and scored a great goal as well. Eddie was causing the shobdon defence loads of problems and scored two well deserved goals. Owen pulled off a couple of brilliant saves to keep a clean sheet.

The whole team played brilliantly today and were well deserved winners with the game finishing 9 nil. 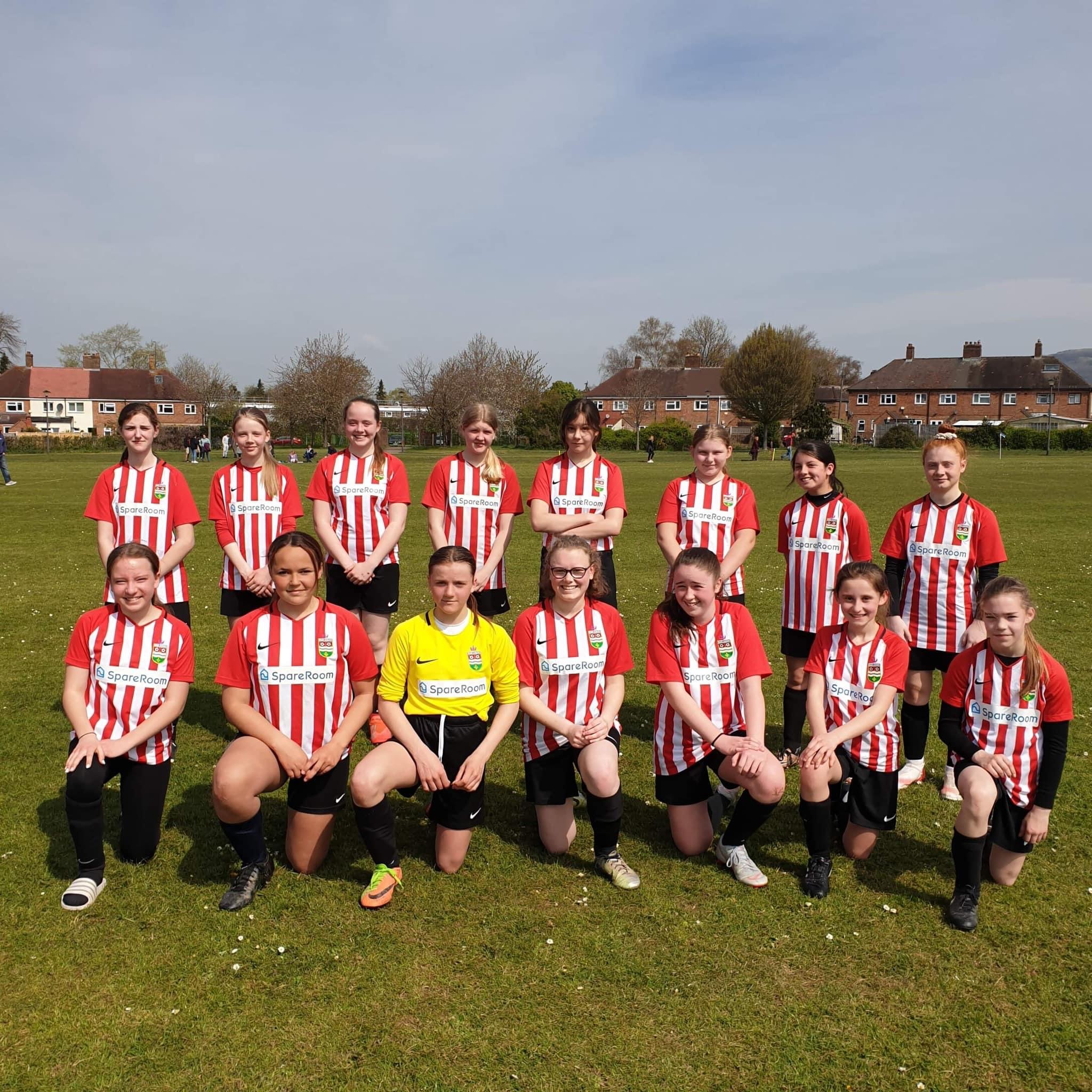 U14 Girls Colts were hosted by Prestbury Panthers on Sunday with their 1st league match after the break.

The 1st half of the game was hotly contested, with Prestbury playing a pressing game, making the defence work hard, with Summer making some brilliant saves in goal. Ross held Prestbury at bay for the whole 1st half and no goals conceded.

The 2nd half saw Ross starting to tire again a strong and physical Prestbury team, the scales tipped in Prestbury’s favour. Ross conceded goals in the 9th and 22nd minutes of the 2nd half and though they battled valiantly they could not match a strong team with some exceptionally fast players. 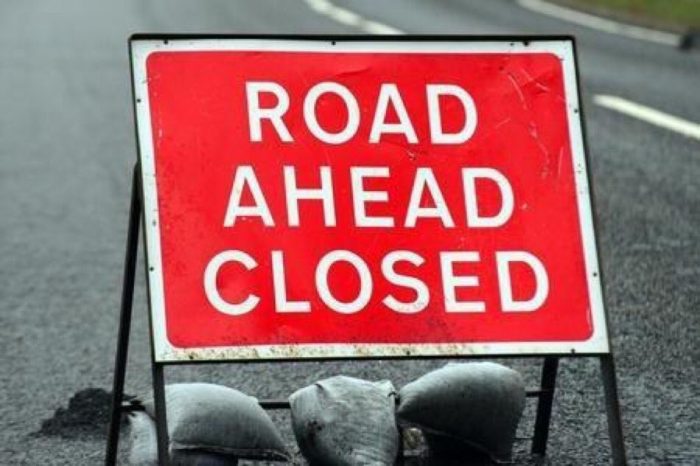