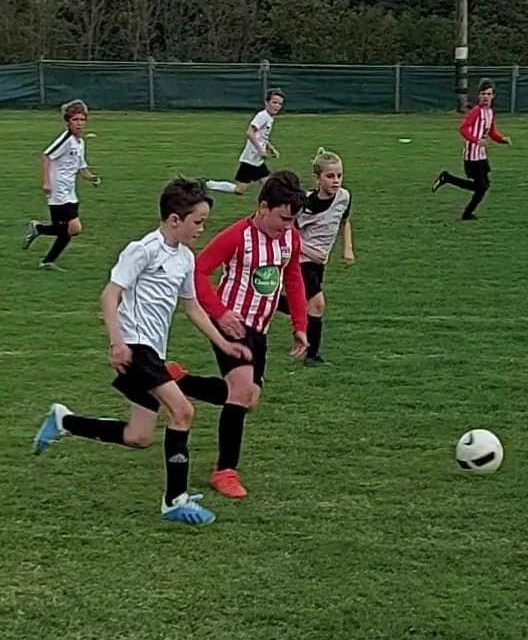 Ross started slowly and had Morgan to thank for keeping the match goalless, but soon fell 2 goals behind. The boys responded brilliantly, though, scoring 4 unanswered goals.

Owen set up Tyron’s opening goal and Tyron soon brought the scores level with a composed finish. Tyron then returned the favour to set up Owen’s first goal, before a great team move saw Tyron play the ball through to Euan. After a great turn, Euan beat the RDC keeper who had come off his line, and with the goal at his mercy saw his shot cannon off the crossbar. It looked like the RDC had escaped, but Owen latched onto the loose ball and put Ross 4 – 2 up at the break.

It had been a hard fought first half with Ben and Zak making countless key interceptions, tackles and clearances in the Ross defence.

The second half didn’t start so well, with the RDC scoring early on and Morgan forced into another great save, but Ross responded well with further chances for Tyron and Euan. The RDC scored 2 quick goals to retake the lead and Owen made a great block to ensure Ross didn’t fall further behind. Again, Ross responded well with numerous chances falling to Timmy and Euan but, against the run of play, the RDC stretched their lead before a great through ball by Tyron saw Timmy fire in a super left foot strike to make it 5 – 6 with a few minutes left. Ross looked for a well deserved equaliser but conceded late goals to end any chance of getting a result, but it had been a great effort from all of the boys.

Ross Juniors U10s are looking for new players to join this season’s squad. If in school year 5 and interested please contact the club on info@rossjuniorsfc.com